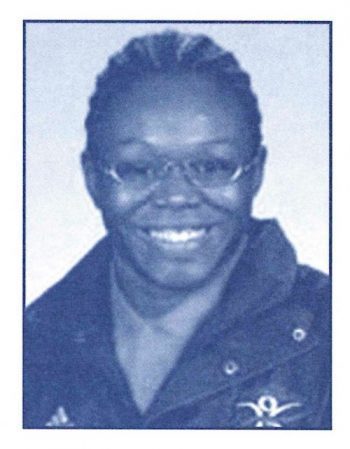 Since 1967, College Now has awarded $71 million in scholarships to students, and those scholarship recipients have gone on to achieve great things. As we celebrate College Now’s 50th Anniversary, we want to share some of those alumni stories with you. As the 2018 Pyeongchang Winter Olympics get underway, let’s look back at the story of our own Olympian, wrestler Toccara Montgomery. Although her athletic prowess helped advance her postsecondary studies, it was the extra financial help from College Now that closed Toccara’s funding gap and made matriculation to college possible.

Born in 1982, Toccara Montgomery grew up on the east side of Cleveland.  Her path to the Olympics began to take shape after the conviction of her father for a double homicide in 1998. Toccara, a teenager who had a close relationship with her father, struggled to cope with the conviction.

“She buried herself more and more,” her mother, Tara, told Sports Illustrated in 2002. “She wasn’t hurting in school, wasn’t hurting socially, but she was hurting inside.  She needed to just let it out.”

The way to let it out for Toccara, it turned out, was wrestling.  As a sophomore at East Tech High School, Montgomery happened to one day hear an announcement that the wrestling team was looking for new students to join. Curious, Toccara made her way to the first practice, one of only five girls to do so.  Immediately, Coach Kip Flanik recognized her talent, and pushed her to hone her abilities.

By early 1999, Toccara had won a silver medal at the girls’ nationals in Michigan. With the help of Coach Flanik, who assisted with her training costs and travel, Toccara went on to win her first national open title in 2000 as a senior at East Tech. It was at this same time that Toccara began to realize that wrestling could lead to college. However, while she knew attending college was now possible with athletic scholarships, she recognized there would still be additional costs, and turned to College Now – then the Cleveland Scholarship Programs – for help.

“[College Now] helped a lot,” she told Cleveland Magazine in 2004.  “They helped me with books and spending money.”

With the help of her College Now advisor, Toccara applied for additional scholarships and was awarded an additional $1,000 per year for four years. With those funds making up her remaining balance, Toccara’s dream of attending college became a reality.

In 2001, Toccara began pursuing a degree in elementary education at University of the Cumberlands, where she wrestled for the Cumberland Patriots wrestling club. That same year, she joined the U.S. World Wrestling Team and became the first American to be named Women’s Wrestler of the Year by USA Wrestling. She achieved four U.S. junior and senior national titles between 2001 and 2004, obtained two Pan American Championship trophies in 2002 and 2003, won two silver medals at the 2001 and 2003 World Championships and took home a gold medal at the 2003 Pan American Games.

Continuing her domination in women’s wrestling, Toccara made the U.S. Women’s Wrestling Olympic Team in 2004, the first year that women’s wrestling was represented at the Games. Toccara placed seventh overall.

After the Olympics, Toccara returned to Cumberlands to complete her degree. She graduated in 2006 with her Bachelor’s degree in education. According to the Associated Wrestling Press, after her graduation, Toccara joined the coaching staff at the University of the Cumberlands, where she helped shape the program into one of national recognition.

In 2009, Toccara earned her master’s degree in instructional leadership from Cumberlands and accepted a position as head coach of the wrestling team at Lindenwood University.  In 2017, Toccara announced in a Facebook post that she would be stepping away from wrestling, focusing instead on teaching kindergarten.

While her wrestling career has been illustrious and garnered her worldwide recognition, Toccara’s academic success should not be ignored. Prior to the 2004 Olympics, The New York Times published a profile on Toccara, and spoke to Coach Flanik, her high school wrestling coach.

“I want to see Toccara with a gold medal, but I will be more proud to see her be the first graduate from college in her family,” Flanik is quoted as saying in the piece by Thomas George. “If she goes to the Olympics and wins it all or if she goes and does nothing, she still has so much more to offer.”

Toccara is just one of the outstanding alumni who have received College Now scholarships and services. Continue to visit our blog in the coming months to read more about some of the unique and inspiring individuals who have come through our programs over the last 50 years.