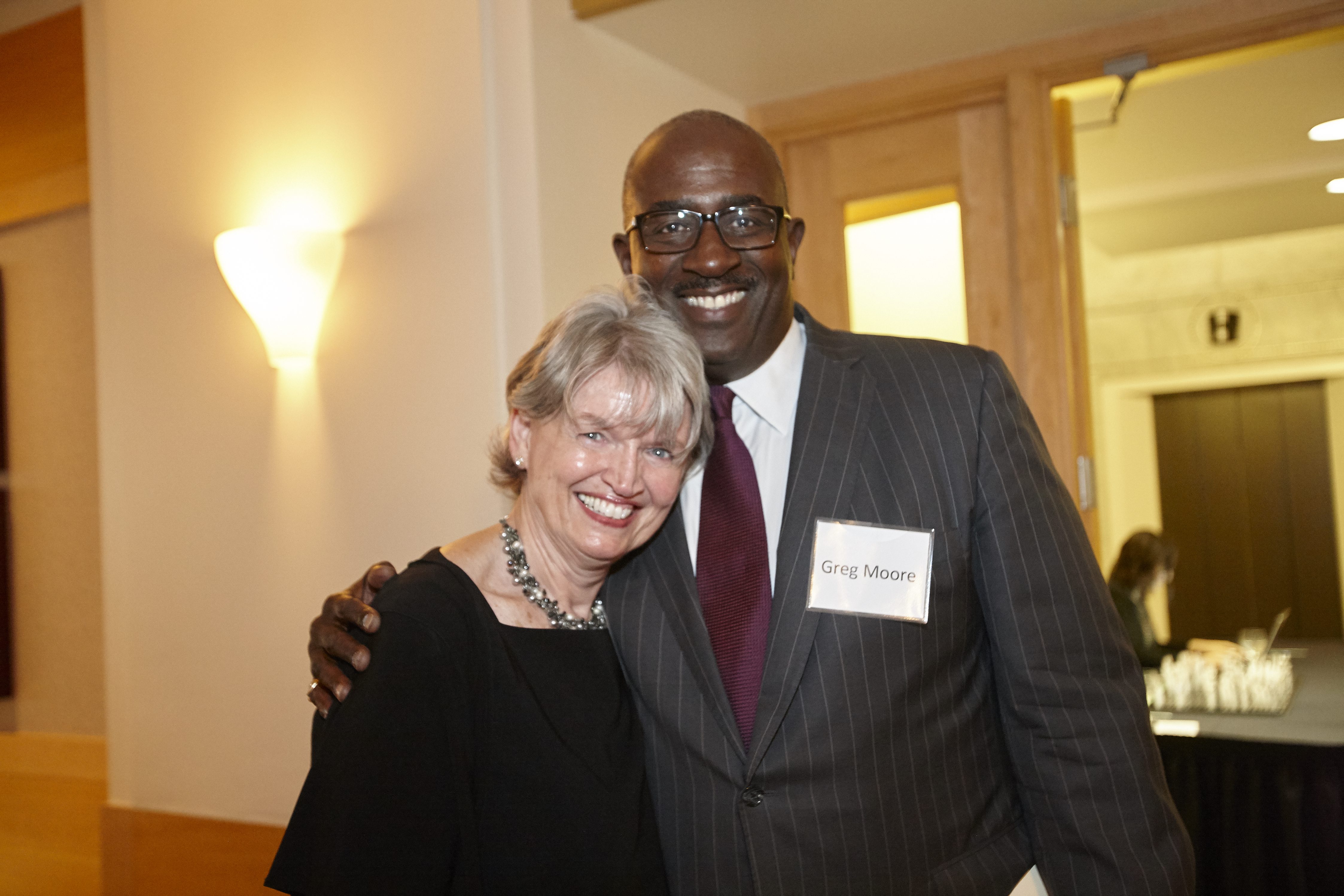 Greg Moore was in a panic. It was the spring of his senior year at Glenville High School, and his friends had all started to receive their college acceptance letters. Greg didn’t understand – weren’t you supposed to apply to college after you graduated from high school? When did all his classmates fill out applications?

As the first in his family to approach high school graduation and even begin to think about college, Greg hadn’t understood the college application and selection process. And now, he was paying for it. He rushed to his counselor’s office, who was too busy to help him. Desperate, Greg turned to the only available person in the office, a Cleveland Scholarship Programs advisor in her second year on the job named Carolyn Beeler.

Carolyn listened to Greg and reviewed his situation. Honestly, she told him, she wasn’t quite sure what could be done at this point, but she was going to try. She knew the Associate Director of Admissions at Ohio Wesleyan University, so she gave him a call. Greg listened to their conversation, as Carolyn told him that she was sitting with a great student who had made a mistake and could he please just take a look at him? When Carolyn got off the phone, she told Greg that, if he could get down to Ohio Wesleyan that weekend to meet with the Associate Director of Admissions, he had a shot at acceptance. Greg agreed. Before he left, he asked, “Why did you say all that about me? You don’t even know me.”

That weekend, Greg got on a bus and travelled to Ohio Wesleyan University. “I can do this,” he thought. “I’m going to do it.” Upon his return to Cleveland, Greg and Carolyn sat down and filled out his application. In June, Greg was accepted into Ohio Wesleyan. Carolyn helped him fill out his financial aid paperwork, and he was off.

It was at Ohio Wesleyan that Greg discovered his love of journalism. As a student, he created his own paper on campus, and graduated in 1976 with his Bachelor’s degree in journalism and political science. He went to work for the Journal Herald in Dayton for years, followed by a six-year tenure at the Cleveland Plain Dealer, where he served as a reporter and editor. In 1986, Greg went to work for the Boston Globe, where he spent 16 years; he became managing editor of the newspaper in 1994. In 2002, Greg left the Globe and assumed the role of Editor in Chief at the Denver Post, a position he held for 14 years. During that time, Greg led the Denver Post to four consecutive Pulitzer Prizes, a feat, he notes, only The New York Times has also accomplished.

Throughout his career, Greg frequently thought back to Carolyn Beeler, the advisor who was so responsible for his postsecondary journey. He tried to find her, but she had left College Now and he couldn’t find where she was now working. One day, though, fate intervened for the second time in the pair’s relationship.

Greg was a member of Ohio Wesleyan’s Board of Trustees, and an Ohio Wesleyan admissions officer approached him at a meeting on campus one day. She had been in Northeast Ohio for a college fair, she said, and a woman noticed her Ohio Wesleyan pin and asked her if she knew of one of her former students, Greg Moore. The woman, it turned out, was Carolyn Beeler, now a counselor in the Beachwood schools.

Greg and Carolyn were reunited in the 2000s, and Carolyn and her husband were in the audience when Greg was inducted into the Ohio Foundation of Independent College’s Hall of Excellence in 2015. Greg and Carolyn had the opportunity to connect again in June of this year when Greg returned to Cleveland for College Now’s annual Invest in Success event.

Celebrating the organization’s 50th anniversary, Invest in Success this year honored the four funders that have bene supporting College Now from its inception in 1967 – the Cleveland Foundation, the George Gund Foundation, the John Huntington Fund for Education and the Martha Holden Jennings Foundation. Greg served at the event’s featured speaker and spoke to the impact that College Now had on his life and continues to have on the lives of students throughout Greater Cleveland.

As part of Greg’s visit to Cleveland, he also returned to Glenville High School for a lunch with College Now AmeriCorps members. During the lunch, Greg shared his story with the AmeriCorps members present and discussed with them the importance of the work they have been throughout their past year of service. AmeriCorps members also had the opportunity to ask Greg questions about his career and educational journey, as well as share information about their own career ambitions.

Greg Moore is just one example of the individuals who have been helped by College Now throughout our first 50 years of service to the Greater Cleveland, and we are beyond grateful for his support of College Now at Invest in Success in June.

To read more about Greg and College Now, check out this article from Cleveland.com. You can watch Greg’s speech from Invest in Success on our YouTube channel, and see more pictures from the event on our Facebook.