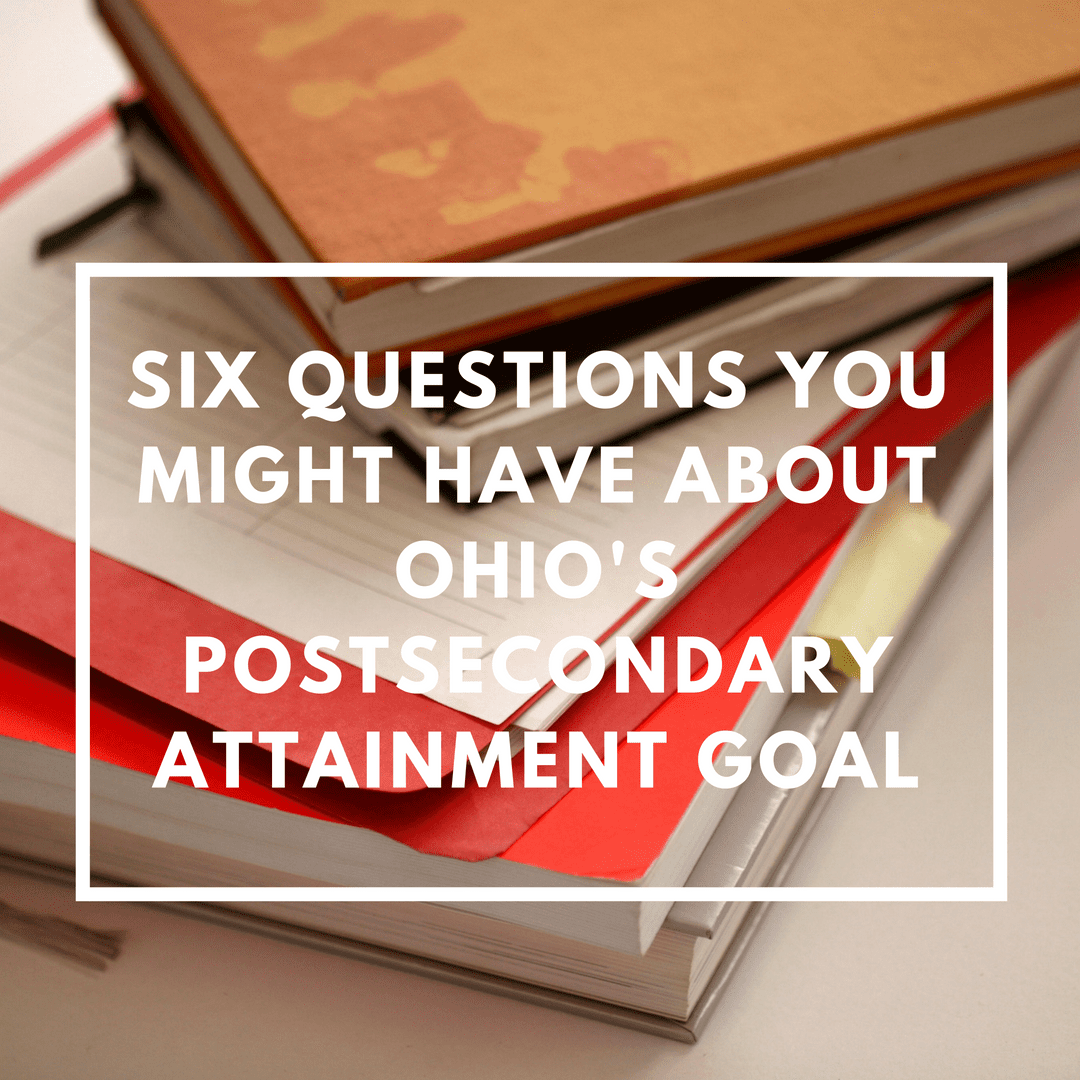 Six Questions You Might Have about Ohio’s Postsecondary Attainment Goal

This blog answers six of common questions regarding the state’s attainment goal.

Why did Ohio set an attainment goal?

The attainment goal was set to reduce a growing gap between the existing skills of Ohio’s residents and the changing demands of employers. Ohio’s economy has been shifting for decades from one that was highly industrial to one that is more service-based. In the first decade of the 21st century, nearly 40% of manufacturing jobs were lost. This decline was exacerbated by the recession, when 166,000 manufacturing jobs were lost.

Ohio’s shifting economy reflects national trends. The nation lost 8 million jobs during the recession (2007-2010), the majority of which required limited to no education beyond a high school diploma in industries like manufacturing or construction. Notably, since the recovery began in 2010, 11.5 million of the 11.6 million jobs created have required some postsecondary education (2010-2015). In other words, 99% of the jobs created since the recession require some education beyond a high school diploma.

If Ohio wants to continue to make economic gains, and promote the well-being of its citizenry, more individuals must continue their education and develop the skills needed for employment in a 21st century economy.

The goal serves as a bold estimate of where the economy is moving and what skills Ohioans needs for full-time employment. Further, individuals with education beyond a high school degree have a higher earnings potential, are less likely to be unemployed and are more likely to be civically engaged.

What does the attainment goal measure?

The attainment goal measures working-aged adults ages 25-64 that hold a degree, certificate or other postsecondary workforce credential of value in the workplace by 2025.

The goal is not disaggregated based on race and ethnicity and it does not includes subgroup goals. However, when we look at the postsecondary attainment rates by race and ethnicity in Ohio, it is obvious that there are major disparities that need to be addressed if we are to substantially increase postsecondary attainment.  Notably, 67% of Asian Americans have postsecondary education, as do 39% of Caucasians, 25% of African Americans and 24% of Hispanics. College enrollment among Ohio residents when disaggregated by race/ethnicity closely aligns with these attainment rates.

Policymakers and practitioners must closely monitor these disparities and provide resources to ensure that there is equitable support for populations that have low-postsecondary attainment rates.

Do other states have attainment goals?

Statewide postsecondary attainment goals date back to the late 1990’s. In a 2005 Jobs for the Future report, 24 states were listed as having at least one goal related to college enrollment, retention or graduation.

Is Ohio on track to meet its goal?

Ohio has already implemented policies to promote college going and completion initiatives across the state. Ohio has also eased the process of transferring from one college to another, expanded College Credit Plus so that more students are able to graduate from high school with some college credit and is helping adult learners return to higher education.

The state is working in partnership with a committee comprised of Ohio’s major education groups including Philanthropy Ohio, the Inter-University Council, and the Ohio Association of Community Colleges; collective impact conveners like the Higher Education Compact; and college access groups like College Now Greater Cleveland to help drive these efforts.

If Ohio wants to reach its 65% goal, more intensive policy and grassroots efforts are needed. Here is a link to a one-pager that outlines additional strategies needed to reach the 65% goal.

What happens if Ohio misses the 65% attainment goal?

Nothing. This goal is ambitious (requiring an additional 1.7 million degrees!) and will be difficult to reach. However, we must take it seriously if we want to create strong communities with jobs that can support a middle class lifestyle.