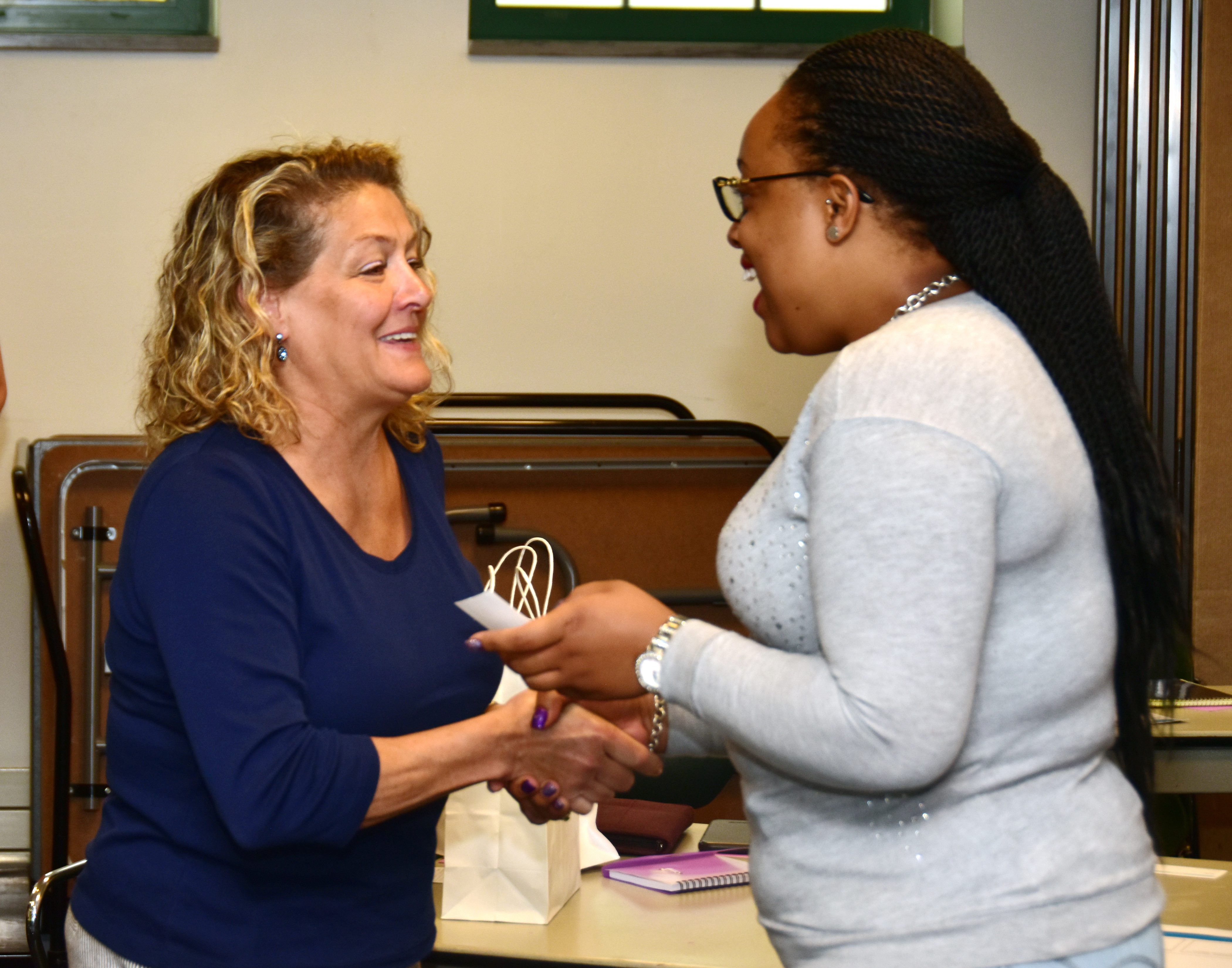 By Jane M. Von Bergen
Photos by I. George Bilyk

Inside the library, all was quiet as is usual in libraries – just whispers and murmuring.

Even so, nobody shushed Patricia Gray, 58, and Victoria Gallagher, 57, as they hugged in the corridor, alternately weeping and smiling, trying to keep their joy courteous, given the location.

“We’re miracles, that’s what we are,” Gallagher said.

Gray and Gallagher hadn’t known each other before that September Saturday, when they met at the Brooklyn branch of the Cuyahoga County Public Library for an Adult Scholars Summit held by College Now Greater Cleveland, an affiliate of The Graduate! Network,  a national organization.

For 50 years, College Now has maintained a laser focus on increasing post-secondary educational attainment – from college to professional certificates – in the greater Cleveland area, helping 29,000 a year. Mentorship matters.

In the Bridging the Talent Gap Employee Community Report for Cleveland, one in five adult learners surveyed identified mentoring as helpful in achieving education goals. The 2019 report, funded in part by Walmart, the Cleveland Indians, Team NEO and College Now, pointed out that one in four adult learners – 26 percent – wanted educational advice geared to career goals.

And while College Now annually recruits hundreds of mentors to pair with its traditional scholarship recipients, there simply aren’t enough for adults returning to college after years away from the classroom.

So, at least for now, if the adult learners were going to be mentored, they’d have to mentor themselves. And, for guidance on career-building basics like LinkedIn and resume writing, well, they’d have to do it as a group.

Which was, as it turns out, plenty OK.

The food at the College Now event was good – coffee, chicken, cookies and some salad for the virtuous among the 30 or so gathered in a meeting room. The sessions were even better, featuring presenters on LinkedIn and resume writing. Volunteers stood ready to offer suggestions.

The connections forged between people like Gray and Gallagher. College Now wisely set aside time so participants could exchange business cards – and, more importantly, encouragement.

As adult students well beyond traditional college years, Gray and Gallagher shared a common life story with others in the room. To be in college, they and many others there had to struggle — sometimes daily — with poverty, abuse, addiction and crippling self-doubt. It’s not only the story in Ohio, but across the nation. It’s a narration that The Graduate! Network is trying to change one comebacker at a time.

“You think you’re the only one, until you are put in this situation where you can meet each other,” Gallagher said. “It’s a big relief.”

Gray nodded and pressed Gallagher’s hands in hers. “Nobody would have thought I’d be where I am today,” she said. 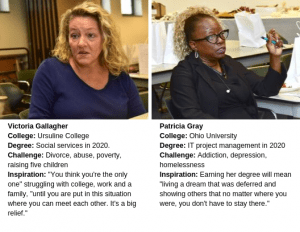 In Ohio, just over one in four adults has a bachelor’s degree or higher. One in five adults, 20.5 percent, are like Gallagher – people who began college, but didn’t finish. College graduates typically command higher earnings. But adults who don’t finish don’t get the earnings bump that comes with a diploma. Worse, they are often saddled with college debt they can’t afford to pay.

Gallagher bounced around the country as a military spouse, earning an associate degree while she stayed home, raising five children. When her husband left the Marines, they moved to Medina, Ohio. Over time, Gallagher said, she faced escalating domestic abuse. “He even threw things at me in the grocery store.” Struggling to cope, she turned to alcohol, eventually conquering a three-year addiction.

Next? An ugly divorce. The children lived in the family home with their father, and “I was homeless during the divorce, until the court intervened.”

She turned to Cuyahoga Community College en route to a four-year degree, earning a second associate degree. The Women In Transition program there connected her to College Now, which is helping Gallagher graduate from Ursuline College with a bachelor’s degree in social work – she should get her diploma in 2020.

Until she finishes, Gallagher cleans houses. “It’s how I pay my bills,” she said. “Sometimes I clean three or four houses a day.”

Because of her $2,000-a-semester scholarship from College Now, Gallagher can clean less, giving her time for the unpaid internship both required for graduation and key to building a career.

Gray’s story? “Fifteen years of depression and addiction,” she said. “I never thought that messing up my life would now allow me to help others.”

After Gray’s mother died when Gray was 34, Gray spiraled into depression and addiction. Her cousin raised her son while Gray slept in shelters and on friends’ sofas.

By 2010, Gray managed to get clean and enroll at Cuyahoga Community College. In 2017, she earned an associate degree in information technology. “Once I accomplished that,” she said, “I realized there wasn’t anything I couldn’t do.”

Except — she ran out of money.

College Now rescued her dream with scholarships. Gray expects to earn a bachelor’s degree in IT project management from Ohio University in 2020. Meanwhile, she juggles schoolwork with a counseling job and IT consulting work.

For Gray, the diploma will mean “living a dream that was deferred and showing others that no matter where you were, you don’t have to stay there.”  Gallagher offered one word: “Stability.”

In the library, both women talked about the most basic benefit – respect. Instead of being talked to and lectured at, their education has already put them in the position of being listened to and treated as knowledgeable professionals.

“For the adult learner, there are so many barriers that have to be addressed,” Gray told the group earlier. “You need that support. A lot of people who aren’t on this journey don’t understand what this is about.

“I’m so grateful this is being recognized,” she said, turning to the College Now staffers who organized Saturday’s event. “Thank you.”